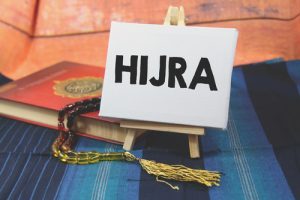 The Hijrah witnessed a number of extraordinary incidents that show Allah’s perfect care for His Prophet.

If greatness of historical events is measured by their constructive influences and decisive resultant effects on the motion of life as well as the march of human beings on earth, the value of such events is – besides this – known through the elevated morals, noble principles and ethical demeanors that co-occur with these events.

Hence, the Hijrah event was by all measures an outstanding milestone. It yielded great fruits, displayed lofty principles and values in action, and expounded Prophet Muhammad’s (peace and blessings be upon him) prominent skill in planning as well as putting his whole trust in Allah the Almighty.

This can be seen in so many situations and incidents that took place throughout the course of Hijrah. Some of these will be cited here to help Muslims emulate them and put them into action in due, similar contexts. Two of the many perfect aspects of the Prophet’s personality that appeared during the Hijrah event will be highlighted here: the Prophet’s paramount ability to plan, and putting his full trust in Allah following observing all the possible material means.

No doubt the Hijrah witnessed a number of extraordinary incidents that show Allah’s perfect care for His Prophet and his personal safety. Foremost among these is the fact that Allah provided him with unseen aides besides showering mercy and tranquility upon him. The Qur’an states this as saying: “And Allah sent down His tranquility upon him and supported him with soldiers [i.e., angels] you did not see.” (At-Tawbah 9:40)

However, the flow of incidents was guided by the natural laws set by Allah to manage this present life and govern all that takes place therein. This can be seen in what follows.

In this pattern that is characterized by putting the Prophet’s full trust in Allah as well as cherishing the material means or natural laws set by Him in the universe, the Hijrah incidents succeeded in a row. The Prophet (peace and blessings be upon him) was so protected and supported by Allah Almighty that all the Quraishites’ malicious schemes were defeated. It was Allah’s Will that the plans of Prophet Muhammad succeed and those of the disbelievers fail. He says in the Ever-Glorious Qur’an: “Allah has already set for everything a [decreed] extent.“ (At-Talaq 65:3) And, regarding DhulQarnain, Allah says: “Indeed, We established him upon the earth, and We gave him to everything a way [i.e., means]. So he followed a way.“ (Al-Kahf 18:84-85)

In a narration by Imam Ahmad on the authority of Asmaa bint Abi Bakr that she said: “We prepared food provision for them… they set out going around the mountains of Makkah until they found the mountain which they chose as their [temporary] resort. Upon seeing a man in front of the cave, Abu Bakr said, “O Prophet of Allah! He could see us!” The Prophet replied, “No! There are angels that cover us with their wings”. The man sat to relieve himself facing [the mouth of] the cave. Thereupon the Prophet said, “If he could see us, he would not do that.” (Musnad Ahmad)

Despite all the efforts the Prophet has exerted to camouflage the Hijrah event and maintain its secrecy, the Quraishites reached the mouth of the cave where he and Abu Bakr were hiding. This means that when the required human effort is exhausted, comes the aid from Allah Who never lets down or abandons His Prophet and/or his worshippers in a way that may deliver them to His and their adversaries.

The Almighty reaffirms this meaning in the Qur’an that He will protect His Prophet when he is forsaken and/or unattended by all other supporters. The companions were scattered at that time as many of them have emigrated to Madinah earlier, while some remained in Makkah. Thus, the Prophet (peace be upon him) had no one else left beside him at that very time except Allah and Abu Bakr…

If you do not aid him [i.e., the Prophet] – Allah has already aided him when those who disbelieved had driven him out [of Makkah] as one of two, when they were in the cave and he [Muhammad] said to his companion, “Do not grieve; indeed Allah is with us.” And Allah sent down His tranquility upon him and supported him with soldiers [i.e., angels] you did not see and made the word of those who disbelieved the lowest, while the word of Allah – that is the highest. And Allah is Exalted in Might and Wise. (At-Tawbah 9:40)

Thus, following taking care of all material means in terms of planning and preparing for the action, the Prophet put his trust in Allah and declared his complete dependence on Him Alone and he earnestly directed his face along with his heart towards Allah seeking His mercy, guidance and assistance. In short, the Prophet (peace be upon him) put his trust in Allah without negligence of material means.

This is a great lesson that needs to be learnt by each and every Muslim who should have strict faith that Allah’s help will descend when one’s human means are exhausted and that s/he should be confident that victory is always from Allah who states: “And victory is not except from Allah, the Exalted in Might, the Wise.” (Aal `Imran 3:126)

To conclude, human effort in the world of observing material means cannot be neglected or made little of by Muslims especially those who shoulder the responsibility of inviting others to the way of Allah under the pretense of depending on Allah and leaving everything to Him.

If Prophet Muhammad – though was well protected by Allah – observed all possible human material means to make his plan work out, no doubt we would be more entitled to observe all possible means and use all our cunning and planning skills to make our designs succeed. We have to do all what we can then leave the results to Allah Who knows better than any of His creatures.

Subscribe to Get the latest posts delivered to your mailbox

More in Historical Events, The Faith

Migration to Medina and Brotherhood in Islam

Sheikh Assim Al-Hakeem talks about the meaning and application of the concept of brotherhood after the migration of Prophet Muhammed...