Every speech comes out with a cover from the heart of the speaker. If God allows a speaker to express himself, people will understand his words and comprehend his gestures. 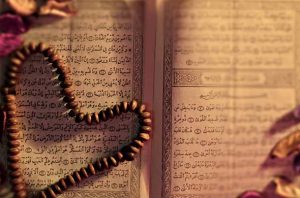 Their speech deserved to be recorded by God in His Glorious Book, the Qur’an.

This stage on our journey to God relates to the servant’s speech in which he tells people about God. Every servant has a responsibility to call people to their Creator, to remind them of their Lord, and to set things right in the universe:

I desire no more than to set things to rights in so far as it lies within my power… (Hud 11:88)

Say (O Prophet): “This is my way: Resting upon conscious insight accessible to reason, I am calling (you all) unto God – I and they who follow me. (Yusuf 12:108)

There are different kinds of speech. God says: “However, man is, above all else, always given to contention…” (Al-Kahf 18:54) There is a certain type of speech which has a considerable influence on people. This speech, as the Sheikh explains, is not the fluent speech that comes out from an intelligent mind or an eloquent tongue, but it is the speech that comes out directly from one’s heart.

Here I recall the speech of the prophets, messengers, and righteous people. Their speech came out form pure hearts. Their speech deserved to be recorded by God in the Qur’an. There are many examples of this speech.

Read the speech of prophet Abraham (peace be upon him): {Said (Abraham): “Have you, then, ever considered what it is that you have been worshiping – you and those ancient forebears of yours? “Now (as for me, I know that,) verily, these [false deities] are my enemies, (and that none is my helper) save the Sustainer of all the worlds, who has created me and is the One who guides me, and is the One who gives me to eat and to drink, and when I fall ill, is the One who restores me to health, and who will cause me to die and then will bring me back to life, and who, (hope, will forgive me my faults on Judgment Day! “O my Sustainer! Endow me with the ability to judge (between right and wrong), and make me one with the righteous, and grant me the power to convey the truth unto those who will come after me, and place me among those who shall inherit the garden of bliss!

And forgive my father for, verily, he is among those who have gone astray and do not put me to shame on the Day when all shall be raised from the dead: (and when) only he (will be happy) who comes before God with a heart free of evil! (Ash-Shu`araa’ 26:75-89)

Read also the speech of Prophet Noah (peace be upon him):

And convey unto them the story of Noah-when he said unto his people: “O my people! If my presence (among you] and my announcement of God’s messages are repugnant to you -well, in God have I placed my trust. Decide, then, upon what you are going to do (against me), and (call to your aid) those beings to whom you ascribe a share in God’s divinity; and once you have chosen your course of action, let no hesitation deflect you from it; and then carry out against me (whatever you may have decided), and give me no respite! But if you turn away (from the message which I bear, remember that) I have asked no reward whatever of you: my reward rests with none but God, for I have been bidden to be among those who have surrendered themselves unto Him. (Yunus 10:71-72)

All these speeches came out with a cover from the heart of the speakers.

The same holds true for Prophet Muhammad’s speech. Read, for example, his speech in the Battle of Tabuk:

“Verily the most veracious discourse is the book of God (the Quran). The most trustworthy handhold is the word of piety (taqwa). The best of religions is the religion of Abraham. The best of the sunan is the Sunnah of Muhammad. The noblest speech is the mentioning of God. The finest of narratives is this Qur’an. The best of affairs is that which has been firmly resolved upon. The worst religions are those which are created without sanction. The best of ways is the one trodden by the prophets. The noblest death is the death of a martyr. The most miserable blindness is waywardness after guidance. The best of knowledge is that which is beneficent. The best guidance is that which is put into practice. The worst blindness is the blindness of the heart. The upper hand is better than the lower (i.e. it is better to give than to receive). The little that suffices is better than the abundant and alluring. The worst apology is that which is tendered when death stares one in the face. The worst remorse is that which is felt on the Day of Resurrection. Some men do not come to the Friday prayer, but with hesitance and delay. And some of them do not remember God but with reluctance. The tongue that is addicted to false expression is a bubbling spring of sins. The most valuable possession is contentment of the heart. The best provision is that of piety. The highest wisdom is the awe of God. The best thing to be cherished in the hearts is faith and conviction; doubt is part of infidelity. Impatient wailing and fulsome praise of the dead is an act of ignorance. Betrayal leads one to the fire of Hell. Wine (alcohol) is the mother of evils. Each one of you must resort to a place of four cubits (the grave). Your affairs will be decided ultimately in the next life. He who pardons is himself granted pardon. He who forgives others, is forgiven by God for his sins. He who represses anger, God rewards him. He who faces misfortunes with perseverance, God compensates him. He who shows patience and forbearance, God gives him a double reward. He who disobeys God, God chastises him.”

This is a speech which came out from the Prophet’s heart so that it reached the people easily and it had a considerable influence on them. It is a prerequisite for anyone who tells the people about their Creator that his speech should come out from the heart.

If you want to offer advice to any one, you should mend your hear first. When you have a sincere intention in your heart, your influence on people will be stronger, i.e. people will understand your words and comprehend your gestures as the Sheikh says in this word of wisdom.

The article is excerpted from “Some of Al-Hikam Al-Ataiyyah” (The Path to God: A Journey with Ibn `Ata’illah’s Words of Wisdom In the Light of the Quran, the Prophetic Tradition, and Universal Laws of God- By Dr. Jasser Auda

Subscribe to Get the latest posts delivered to your mailbox

To Those Responsible for Christchurch Mosque Terror Attacks…

It is written to the killer who attacked Muslims in Christ Church, New Zealand. We appreciate that you learnt more...